The Geography of South Africa

South Africa occupies the most southern tip of Africa with its long coastline stretching more than 3 000 km from the desert border with Namibia on the Atlantic coast southwards around the tip of Africa and then north to the border of subtropical Mozambique on the Indian Ocean. 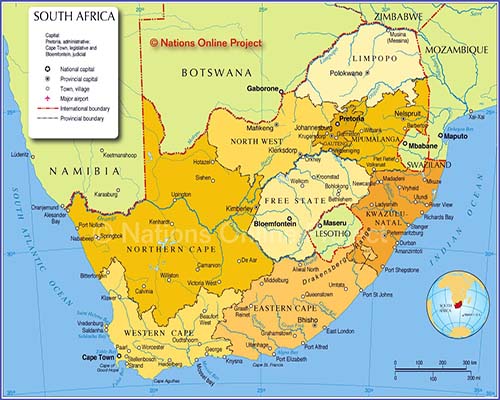 South Africa has more than 290 conservation parks. It is home to almost 300 mammal species, about 860 bird species and 8 000 plant species. The annual sardine run is the biggest migration on the planet.

South Africa is considered to be the cradle of humankind and boasts 40% of all hominid finds on Earth. Stretching latitudinally from 22°S to 35°S and longitudinally from 17°E to 33°E, South Africa’s surface area covers 1 219 602 km2.

Physical features range from bushveld, grasslands, forests, deserts and majestic Mountain peaks, to wide unspoilt beaches and coastal wetlands. The country shares common boundaries with Namibia, Botswana, Zimbabwe, Mozambique and Swaziland, while the Mountain Kingdom of Lesotho is landlocked by South African territory in the south-east.

The warm Mozambique-Agulhas Current skirts the east and south coasts as far as Cape Agulhas, making the east coast ideal for swimming and diving. The cold Benguela Current flows northwards along the west coast as far as southern Angola. The contrast in temperature between these two currents partly accounts for significant differences in climate and vegetation, as well as differences in marine life. Owing to the cold waters of the west coast being much richer in oxygen, nitrates, phosphates and plankton than those of the east coast, the South African fishing industry is centred on the west coast. Saldanha Bay on the west coast is the only ideal natural harbour.

The Worl Heritage sites are:

None of the country’s rivers are commercially navigable and most river mouths are unsuitable as harbours because large sandbanks block entry for most of the year. South Africa has no significant natural lakes. Artificial lakes are used mostly for crop irrigation. The Orange River is South Africa’s largest river. Rising in the Drakensberg Mountains, it traverses through the Lesotho Highlands and joins the Caledon River between the Eastern Cape and the Free State before it empties into the Atlantic Ocean, it forms the border with Namibia. Other major rivers include the Vaal, Breede, Komati, Lepelle (previously Olifants), Tugela, Umzimvubu, Limpopo and Molopo.

South Africa’s surface area falls into two major physiographic categories: the interior plateau, and the land between the plateau and the coast. Forming the boundary between these two areas is the Great Escarpment, the most prominent and continuous relief feature of the country. Its height above sea level varies from about 1 500 m in the dolerite-capped Roggeveld scarp in the south-west, to a height of 3 482 m in the KwaZulu-Natal Drakensberg. Inland from the escarpment lies the interior plateau, which is the southern continuation of the great African plateau stretching north to the Sahara Desert. The plateau is characterised by wide plains with an average height of 1 200 m above sea level. The dissected Lesotho plateau, which is more than 3 000 m above sea level, is the most prominent. Between the Great Escarpment and the coast lies an area which varies in width from 80 km to 240 km in the east and south, and 60 km to 80 km in the west. At least three major subdivisions are recognised: the eastern plateau slopes, the Cape folded belt and adjacent regions and the western plateau slopes.

A subtropical location, moderated by ocean on three sides of the country and the altitude of the interior plateau, account for the warm temperate conditions. South Africa is a relatively dry country, with an average annual rainfall of about 464 mm. While the Western Cape gets most of its rainfall in winter, the rest of the country is generally a summer-rainfall region.
Temperatures in South Africa tend to be lower than in other countries at similar latitudes owing mainly to greater elevation above sea level. On the interior plateau the altitude – Johannesburg lies at 1 694 m – keeps the average summer temperatures below 30°C. In winter, for the same reason, night-time temperatures can drop to freezing point or lower in some places. South Africa’s coastal regions are therefore relatively warm in winter. There is a striking contrast between temperatures on the country’s east and west coasts, owing respectively to the warm Agulhas Current and cold Benguela Current that sweep the coastlines.